● Lucky Sevens gold anomaly extended to approximately 2.5km in length and
450m at its widest point.

● Atlantis gold anomaly extended to over 5.5km in length.

Koonenberry Gold Ltd (ASX:KNB) is pleased to share assay results from a small programme of 288 soil samples over four targets.

The purpose of this round of sampling was to infill and extend existing anomalies previously identified by the Company. Prospects of particular focus included Lucky Sevens, Four Queens, Atlantis and Goodfellows.

“The extension of the known gold anomalies at key targets highlight the prospectivity of the Koonenberry Gold Project and continue to delineate multiple targets that will be drilled early in 2022,” said Koonenberry Gold CEO Karen O’Neill.

The Koonenberry Gold Project lies within the little-explored Koonenberry fold and thrust belt which is considered prospective for orogenic gold systems based on similar lithostratigraphy, structural style, mineralisation timing and tectonic setting as seen in the Victorian Goldfields, in particular, the Stawell Zone¹.

The most recent results from a 288 soil sample programme focus on four targets within the 1,339km 2 tenure and include Lucky Sevens, Atlantis, Four Queens and Goodfellows which are illustrated in Figure 1.

Each target is discussed below.

Six of the ~70 soil assays at Lucky Sevens returned +10 ppb Au results, with a maximum of 52.3 ppb Au. The gold anomaly now extends approximately 2.5km long and is up to 450m at its widest point. More than 2.5km of the length of the known structure has been proven anomalous and the structure is estimated to be greater than 3km long.

Gold anomalism is closely associated with the Lucky Sevens quartz reef. Results are consistent with previous sampling and support a thickening of the anomaly where there is a noticeable bend in orientation of the reef from NW to WNW. 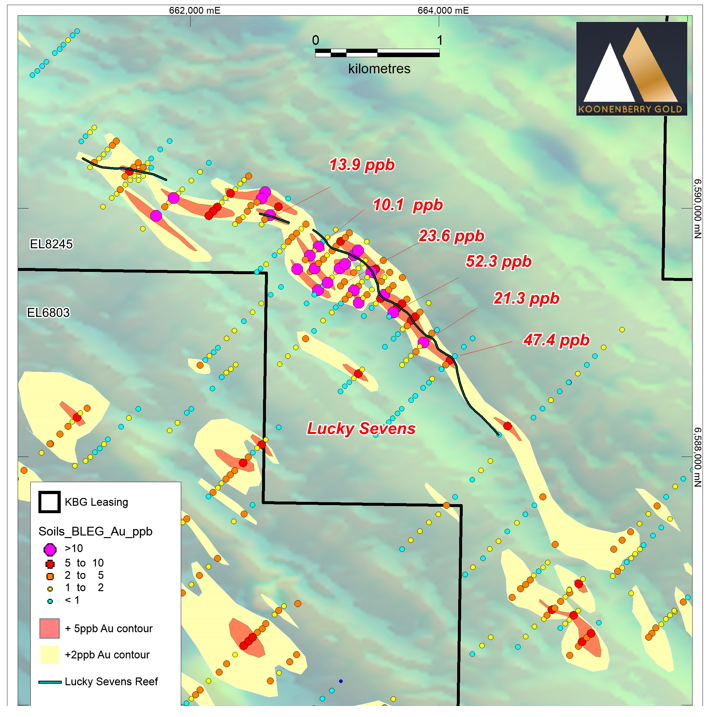 Figure 2 highlights current soil anomaly results along the known structure. Lucky Sevens is the most advanced prospect of the Koonenberry Gold Project. There is outcropping mineralised reef and soil sampling has been effective in defining the mineralised trend of the vein system. Trial geophysical resistivity techniques indicate the structure has a steep easterly dip and extends to significant depths.

At Atlantis, the planned lines were designed to extend the existing anomaly, and the best result of 13.4 ppb Au was returned. This result extends the anomaly by over 1km at +10 ppb Au, making the western branch now more than 5.5km in length, and typically 100m in width. The anomaly is 6km long at +5 ppb Au. Results on the eastern limb show the anomaly narrowing, but still persisting at +5 ppb Au. New results are highlighted in Figure 3.

Overall, the Atlantis anomaly appears to show excellent consistency, even at the current 400-1,000m line spacing. It is situated in a synclinal fold surrounded by mafic rocks of the Bittles Tank Volcanics and is associated with strong silicification and hematite alteration, along with visible copper mineralisation in places. The thickest portion of the anomaly to date occurs within the fold hinge.

The Company is the first to undertake exploration around this target. Atlantis is currently the largest soil anomaly defined on the project to date and its copper association, (up to 15% copper in rock chips), is pointing towards a completely different style of mineralisation.

Results of infill soils at Four Queens have continued to show that this prospect has excellent size potential, with three samples in the current program returning over 10 ppb Au, including a maximum of 26.4 ppb Au. The anomaly has been extended from 2.5km to over 4km long at typically 100m width at +5 ppb Au and is still open in some directions as illustrated in Figure 4.

The anomaly is situated along the margin of the Nuntherungie Basin and appears to be associated with the Kandie Tank Fault splay. There has been no previous exploration undertaken in the area.

This is a relatively new target that lies adjacent to the Turkey Creek Fault, one of the many prospective splay faults from the Koonenberry Fault. The highest gold value in the current program of 105 ppb Au was reported from this area. A number of discrete anomalies are recognised with a current strike extent of ~1km, open to the south and east as illustrated in Figure 5.

Outcrop in this area is quite poor, but comparison of the results in relation to the detailed magnetic images, (which only partially covers the Goodfellows target) highlights the importance of both NNW and WNW –trending structures.

A programme of a further 441 infill soil samples has been completed and are to be delivered to the laboratory for assay. This programme has focused on regional reconnaissance as well as additional infill. These results are expected to be reported in November.

The Company has received the pulps from all past soil sampling programs and will soon begin a program of multi-element geochemical characterisation using portable XRF. This will assist not only in identifying pathfinder elements of interest in gold exploration, but also other mineralisation styles which have never been previously investigated.

The Company is pursuing large gold deposits at its Koonenberry Gold Project and is encouraged not only by the geological similarities with the Victorian Goldfields, but also by the size of the geochemical anomalism generated and widespread surficial expression of gold to date.

Koonenberry CEO Karen O’Neill said: “The results continue to affirm our belief that there is strong prospectivity for significant discovery. The anomaly extensions, particularly at Atlantis, more than 5.5km, and Lucky Sevens, more than 2.5km, build our geological knowledge and with detailed mapping, complemented with the multi element geochemistry data, we will be able to characterise top priority targets and design the drill programme for a major RC drilling campaign to follow in early 2022.”

This ASX release was authorised by the Board of the Company.

Greenfield and Reid (2006). Orogenic gold in the Tibooburra area north of Broken Hill- an extension of the Victorian goldfields? (AESC2006, Broken Hill). 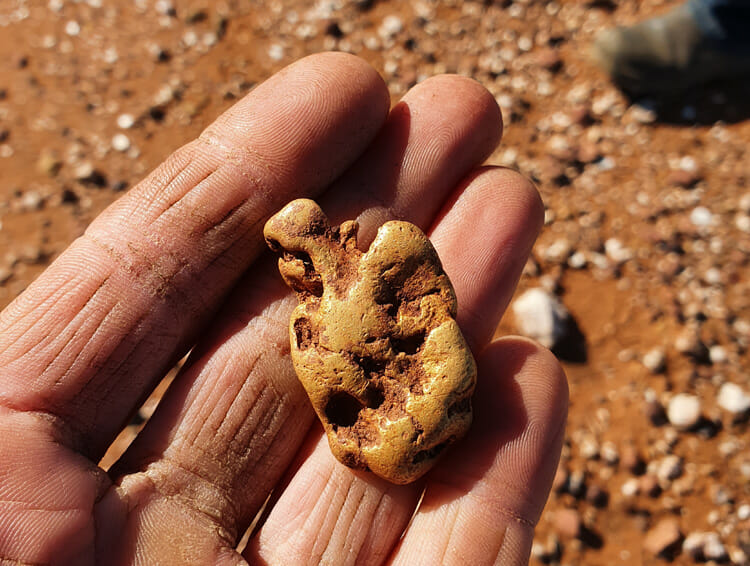 Koonenberry Gold Ltd (ASX:KNB) is pleased to provide another progress report from its soil sampling campaign. Results from the remaining 219 out of the 441 soil samples taken, (previous results reported in ASX Announcement 23 November 2021), have been received.

Koonenberry Gold Ltd (ASX:KNB) has revealed recent results have strengthened our interpretation that our Project shows similarities to the Victorian Goldfields.

The information on the following pages relate to an offer of fully paid ordinary shares in Koonenberry Gold Limited (ACN 619 137 576) (‘Offer’).  The Offer is being made pursuant to a prospectus dated 2 July 2021 (‘Prospectus’) which has been lodged with the Australian Securities and Investments Commission (‘ASIC’).  A copy of the Prospectus is available on this website.

You must read this important notice before you attempt to access the electronic version of the Prospectus through this website. The information on this page is not part of the Prospectus. If you do not understand it, you should consult your professional adviser without delay.

Nothing contained on this website or in the Prospectus constitutes investment, legal, business, tax or other advice. In particular, the information on this website and in the Prospectus does not take into account your investment objectives, financial situation or particular needs. In making an investment decision, you must rely on your own examination of the Company and the securities and terms of the offering, including the merits and risks involved. You should consult your professional adviser for legal, business or tax advice.

The Prospectus does not constitute an offer of or invitation to apply for securities in any jurisdiction where, or to any person to whom, it would not be lawful to issue the Prospectus or make the Offer.  It is the responsibility of any applicant outside Australia to ensure compliance with all laws of any country relevant to their applications, and any such applicant should consult their professional advisers as to whether any government or other consents are required, or whether any formalities need to be observed to enable them to receive a copy of the Prospectus, apply for and be allotted any securities.

By proceeding, you represent, warrant and agree that:

You should ensure that any copy of the Prospectus that you view or print is completely downloaded.  To the extent permitted by law, the Company is not liable for any loss incurred from accessing or downloading the Prospectus from this website, including but not limited to data corruption or viruses.

I/WE ACKNOWLEDGE THESE TERMS AND AGREE TO BOUND BY THEM.